Last week I had a family emergency but things are better now. I've had a little time for experiments with light sensors and motor control for the firefighter (FF). You can see the mess I accumulated on my tiny work area in a short time!

For experiment uno, I wanted to put the Tamiya motor/gearbox under Basic Stamp control. Eventually this gearbox, attached to Sparky, the firefighting prototype, will be used for speed and acceleration tests to select a final drivetrain. 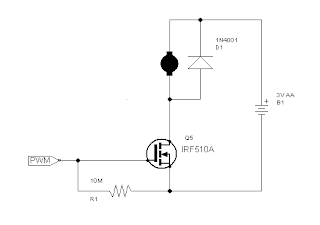 Motor control is covered endlessly in just about every robotics book and on so many web pages. But, I can share my woes. I thought I had it made, since I have a stash of IRFZ20 Power MOSFETs and some other transistors. But none of these worked when using my two AA batteries (2.6V).

has some great tips on selecting MOSFETs.

Next step for Sparky: autonomy! After I replace that broken servo...

Experiment numero dos involves various light sensors. Of note, I picked up an $8 Parallax sensor (actually a TAOS TSL230R) that converts light intensity to frequency. I'm looking forward to playing with this more.

Meanwhile I did some experimenting with a lone IR phototransistor as well as some IR LEDs (thanks to "The Mad Professor" and this thread for the reminder that LEDs can also detect light). Both seem promising for detecting a candle flame. Likewise, a set of assorted CdS cells may be helpful either in identifying the candle, or interfering ambient light, or both.

The most exciting sensor news is a secret. As in, secret weapon! (insert mischevious grin here) If it pans out, this sensor will be a cheap but effective and reliable flame detecting sensor to supplement or even supplant those mentioned so far. Much to do...
Posted by Mike Shimniok