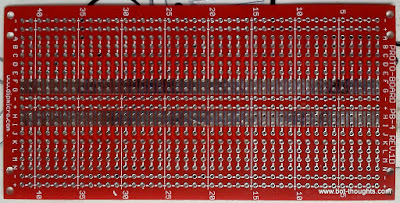 Someone recently turned me onto prototyping circuit boards from dipmicro.com and wow! Awesome!

(So you know, I am in no way affiliated with dipmicro, I was just really impressed)

Yes, that's right, I'm excited about prototyping circuit boards. Let me tell you why, then let me show you my ATtiny13 ESC adapter circuit I built for Pokey my Robot Firefighter.

Thanks to all for the well wishes, advice, input, comments, and more over the past many months. It's all been a big help on this very long journey.

For those of you that want to tune in, Sparkfun is doing a live stream of the event. Check their website.

I'm pleased to say that a minor miracle occurred on Thursday and the changes I made helped. More on that later (I'd rather keep it under wraps until after the competition).

Unfortunately I've run into some snags tonight, primarily with I2C communication between the mbed and the camera board as well as the IR ranger board so no camera and no IR rangers tomorrow. I wasn't able to figure out what's wrong; I'm just too worn out and crumpled under the pressure.

I've added a revised cow catcher / deflector / prerunner bar thingy to Data Bus to hopefully increase its chances of bouncing off of barrels and jumping over curbs versus simply crashing. 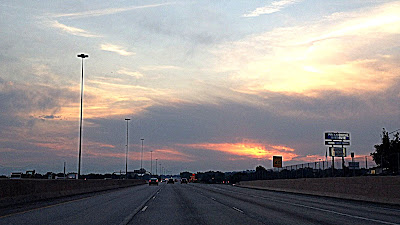 Test runs went a little better last night. I went in a little earlier tonight and left earlier too. The drive in was a little spooky with the smoky haze from the fire near Boulder.

The good news? The robot made it around twice in a row! However, during the last several runs the robot was back to drifting into curbs. I'm still analyzing why and what I can do to improve the estimation.

Meanwhile, on the obstacle detection front... 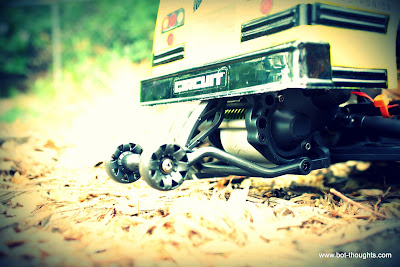 As the days count down to the Sparkfun AVC, I thought I'd share a little bit of my insane world with you. Things are going just ducky right now.

I drove up to Boulder last night to do some more trial runs. At 10pm. I had planned to try my approach of smoothing out the turns to see if it would help.

Of course, I forgot to compile the code just before I left. So that's bad. But I'm now finding out that the code I was going to compile had an evil bug lurking within it. So it's good that I forgot.

Had I brought that code to Boulder, the robot would've followed a swoopy, loopy path, like this... so... pretty... the gentle curves of failure... 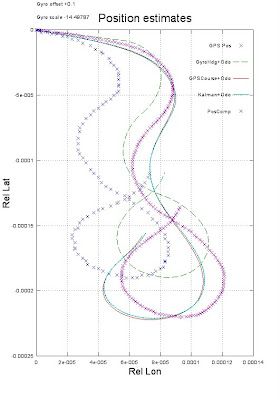 I had made one little change to a variable normally used only for logging... not realizing that the vital steering routine depended on it for calculations. Really? What idiot wrote this code?!


So I have, full force, entered a crazy-zone, the kingdom of Murphy, who's Law makes sure not even the tiniest little thing goes right, so as to wear down every last nerve and further shred every tattered semblance of sanity to which I cling with feeble, keyboard-worn hands that regularly introduce more problems than they solve.

Ah, good times. You should try entering this AVC thing.

But I will not be beaten that easily. Nay, I am not going down without a fight. I shall bend this robot to my will. I shall unleash the rubber chicken charms to fend off evil bugs, and I am going to kick this gyro bias problem to the curb. The very curbs that Data Bus keeps crashing to. 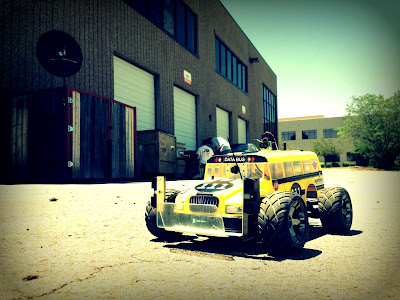 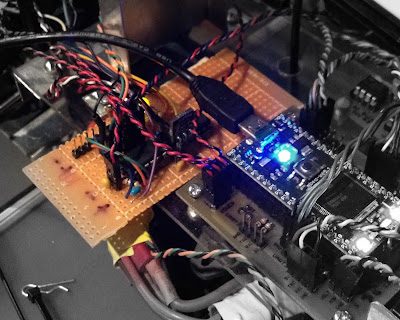 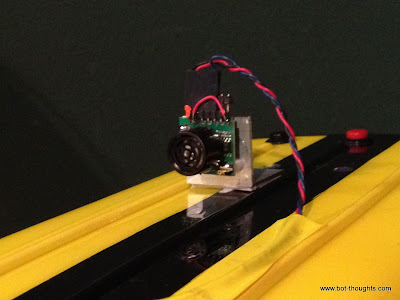 But hey, I've got a whole week to perfect it in addition to fixing my steering and navigation issues and whatever other myriad bugs and problems crop up. No problem...