Reviewing logs for the last dozen runs, it appears that my supposedly rock solid GPS heading isn't. That throws quite a wrench in the works since that is my only reference to correct gyro bias at present.

Initial GPS heading wanders for the first second or so. For position estimation, no biggie, unless it throws things off later?

Did I mention yet that Octave has a bug where Gnuplot axis/mouse values are wrong? So I can't actually tell what the reported heading was without looking at the data. Yay! I have to plot everything straight in Gnuplot to get accurate info. 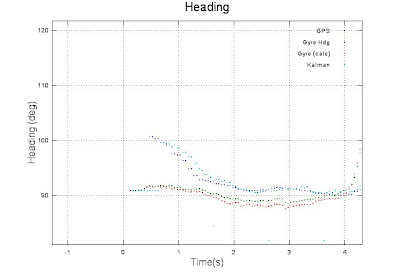 On the second leg, GPS heading is off by at least 2° based on reported course versus witnessed course. This is on most of the plots I've looked at so far.

Without going into the intricate details of how my heading estimation and position calculation works, it's safe to say this is, officially, a Bad Thing. 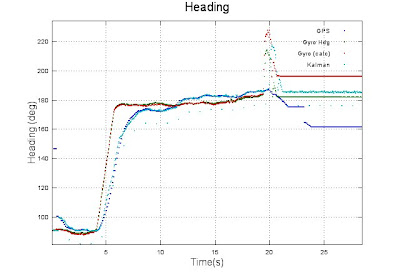 The way I know this is bad: the robot keeps crashing into curbs and it should know better. The robot thinks it's well clear of the curb (dark red path) but is actually wandering right into it (white path is my rendering from recollection of where the robot actually traveled) 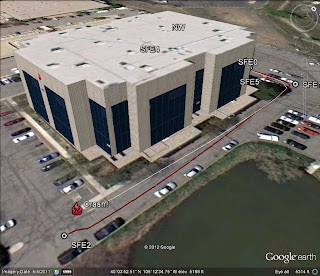 I've gone from the robot knowing where it is and doing nothing about it to the robot being delusional about its position and crashing. These heading errors don't matter as much on a small scale. They matter at the Sparkfun Building, though. I knew they would. Why didn't I test at Boulder months ago?

Incidentally on my two recent successful runs, the GPS heading looks smoother and agrees better with the rest of the data.The resulting estimate is a little better, too.

So what can I do about the problem?  No, let me rephrase that. What changes do I stand a chance of successfully making in the next two days that in turn stand a better chance of improving performance than degrading it?


I suppose it's possible that improving the initial few seconds of heading estimation may help later on in the run. I have a couple of ideas that are pretty simple to implement that might work. Meanwhile, it's a little late in the game to add position filtering. That's a pretty big, bug-prone undertaking.

I haven't made progress on collision avoidance. Last night I crashed hard. So, maybe tomorrow.