ARM chips have gained a foothold in hobby electronics that I suspect will become fairly significant by 2015 or so.

What's required for widespread uptake of ARM are a combination of free tools with libraries that simplify programming and low cost development boards that make prototyping easier.


Not that ARM is the only 32-bit, high performance game in town but I've become very interested in the platform in the last few months. I know this isn't a comprehensive list. If you know of other ARM-based development hardware/IDE platforms I'd love to hear about it.

Bottom line: your best bet is the mbed platform, I think. The library capabilities are awesome and you get a lot of community support. It's a huge step up from the Arduino paradigm many of us are used to. While we wait and wait for the Arduino Due, Wiring, CooCox, Leaf Labs solutions seem viable.

Otherwise you're left to coding your own stuff using CMSIS and vendor libraries. It's more painful and you're basically stuck with a particular vendor, maybe even a particular family.

Coding an ARM is quite a bit more complex than coding an 8-bit AVR and that may be why we haven't seen a clear open source winner emerge yet.

Happy Holidays to those who celebrate!  Despite my fear of sounding like an advertisement, I love Pololu. Great people; they have always been friendly to me, and they come up with some really cool robots and components.

A few weeks ago I received a package with my Black Friday spoils and it was just like Christmas had come early.

Besides the above, I also ordered a 9DOF IMU and have implemented an AHRS using Pololu's sample code running on an ATmega328P.
Posted by Mike Shimniok 3 comments: 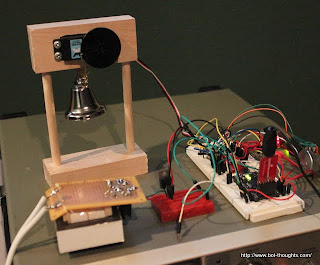 Ok, it's been done before, but why let that stop me?

Through the holidays, when you visit my blog, here, you'll add to the household festivities because a little bell in my office will jingle. And also, an angel will get its wings.

This version is a PC and Propeller-based holiday kludge-o-rama. Here's how...

Now that I've got a mechanism for measuring motor current, it's time to try and quantify the effects of motor magnetic field on magnetometers.

Data Bus was cursed by Compass heading deflection earlier this year and I never discovered its cause. The error observed was on the order of 20 degrees or more.

As part of my ongoing work to get ready for the just-announced Sparkfun AVC 2012, I want to see if I can correlate motor current and magnetometer readings using a Honeywell HMC5843 3-axis magnetometer.

I've been visiting Radio Shack stores since I started dinking around with electronics in high school in the 80's. I'm not affiliated with them, but I've always been a loyal customer. Though I've heard many hobbyists dis them over the years, at least they've always had components on the shelves.

Propeller boards, Arduino boards, Make kits, gyros, GPS, and on and on. Radio Shack is carrying a lot of really great hobbyist/roboticist/maker/electronics nerd gear. Go check it out.

Never have I been so excited to visit a Radio Shack since the days of blue Archer packages and speech chips hanging by the dozens.

Radio Shack has been saying recently that they're committed to DIYers. If this doesn't convince you, nothing will. 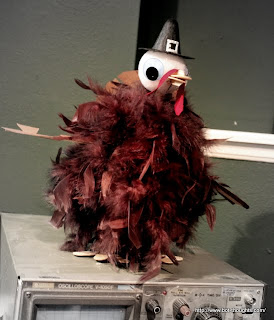 Here are some construction details for RoboTurkey. Warning: lots of pictures and a video, to follow...