Constant Radius Turns. Long overdue, here's more on Pokey's code. Pokey has no encoders and I kind of like the challenge of trying to navigate without them. One has to find ways to distill the analog world into simpler, discrete problems. We already talked about event based navigation as a way to do that. One can make certain decisions about how the robot should tackle the firefighting maze so that the robot is presented with a limited set of navigation/motion scenarios. For example:
One could set up the wall following to also handle turning around corners but there's two problems. Tuning wall following for aggressive correction means overly sharp turns around corners and spinning when too far from the wall (the firefighting walls are wide, Pokey isn't). More importantly, scenario #2 requires a turning routine independent of wall following anyway. I'd rather have one turning routine than two.

I wondered if the ratio of the distances traveled by each wheel in a turn might also be the ratio of PWM signals applied to each motor. This assumes some things that I didn't want to noodle over. So I just tried it by varying pwm of one motor while setting the pwm of the other motor as a ratio of the first:

Close enough for government work as they say.

One can figure out the distance each wheel will travel on a turn of radius r, given a robot of track width w. Keeping it simple, measure r as the radius of the circle scribed by the inner wheel. Circumference, as every person on the street knows, is 2r * pi. So the outer wheel circle's circumference is 2(r+w) * pi.

Take the ratio of these, simplify algebraically (1+w/r), plug in w, and then you can either make a function that takes r as an argument and spits out the ratio, or manually start plugging in various values of r to build a table and make an interpolation/lookup table. Instead I just created a function for turning within nav.c where you supply the ratio (turn_factor) and I chose a hardcoded value when calling it from the main routine. Sloppy, but it worked. Incidentally the nav.c module holds all the lower level discrete behaviors: wall following, going straight, and turning. 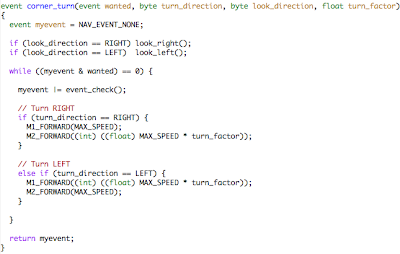 Ideally it would be more elegant to choose a wall following distance (maybe self calibrating by reading distance to wall at the start) and set the turn radius to maintain that distance. Also, to keep the average robot speed constant for smoother looking motion, figure out the radius to the center of the robot and vary both motor PWMs. If you simply reduce the inner motor's power, the robot slows down slightly on turns, but at least this looks more natural than speeding up around turns.
Posted by Mike Shimniok No comments:

The date is set! July 12 is the date of the next chapter in the autonomous robot firefighting saga! SHARC is putting on the contest this time. Can't wait to give it another go. Pokey is looking forward to a chance at redeeming himself from his embarrassing defeat in Ft. Collins.

As before, time is the enemy. School's back in swing (I thought I got the summer off, but noooo) and I have to get the Jeep ready for a big trip to Ouray by July 16. So fine tuning Pokey may be a bit tough to squeeze in, but hey, what else is new?
Posted by Mike Shimniok No comments: