Pokey is an autonomous robot firefighter. Well, technically a contestant in a Trinity-style Firefighting Competition.

The FRRFFC was, unfortunately, only held once. Pokey has seen some upgrades since then in hopes of another competition. Meanwhile, he puts on demos for kids at various robot expos. 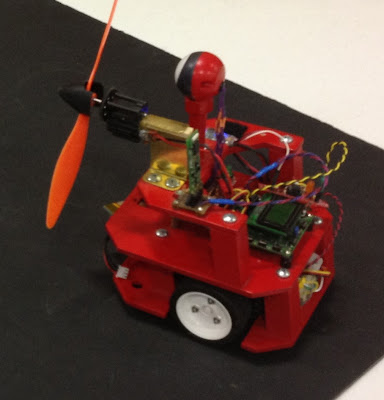 The main additions to Pokey are a Game Boy camera to sense the candle, a large RC airplane propeller and small gearbox motor, and LiPo batteries. 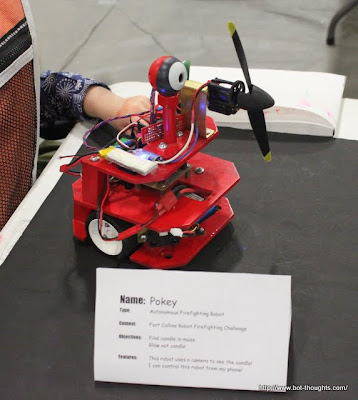 The goal of the competition is for a robot to autonomously blow out a lit candle hidden in a "maze" or house with hallways and 4 rooms of approximately known dimensions. Floor markers indicate doorways and a threshold distance to the candle, as well as the start position.

The robot visits each of the rooms until it finds the candle. It must then drive towards the candle and put it out. For bonus time deduction, it can use water or other "real" extinguishing agent, and for more bonus time, it can travel back to its starting point autonomously.

Pokey failed miserably during the Ft. Collins Robot Firefighting Competition on March 8, 2008. The result of that failure was that I learned a lot about physical programming, lessons I applied to a far more successful robot, Data Bus.

Robot Magazine ran an article on the competition which made all the Fort Collins robot firefighter robots famous! Pokey has his picture in the magazine, too ... along with some goofy guy.

All the blog articles related to Pokey can be found here