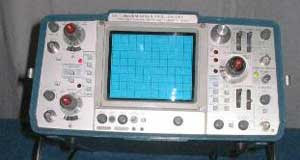 I've been wanting one of these for years... and now I have officially purchased an oscilloscope! I learned on Tektronix scopes in college so I'm glad to have found a reasonable deal locally on this military version of the 465, a dual-trace 100MHz unit. I hope to pick it up tomorrow or early next week. I think this will be invaluable for troubleshooting and for research, like figuring out the capacitance of a capaciflector in various situations so I can build a circuit to interface with an MCU.

Meanwhile I've been working hard on the firefighting robot architecture, but have run into a snag. I don't know how big of a motor I really need or what size wheels. That depends on how heavy the robot is which largely depends on what kind of batteries I choose, which depends on the selected motor. Wheel size and chassis size are interdependent too. Selecting 10" wheels on a 10" chassis means I have to be more creative with side sensor placement. 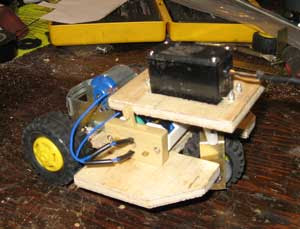 If I weren't on a tight budget I'd just buy a pair of interesting motors and see how they work, but instead I want to eliminate some of the uncertainty ahead of time. So I'm building a proof of concept prototype, a robot much smaller than I originally planned to make, measuring only 12cm wide by 12cm long. I'm using some Tamiya motor and wheel parts, a servo, and some other material I had on hand from the last robot experiment years ago. It's not even using the same drive/steering mechanism I plan to use, but ... so far it's only cost $1.50 for some small hardware. It'll sort of look like the (staged) pic to the right. Yeah, I know it's ugly as sin...

Once it's done, it'll be a good, cheap prototyping platform to prove out the IR flame sensor 40khz wall collision sensors, and other hardware, while I use the Cruiser to prove out the software. Initially, I'll drive it with a Basic Stamp 2 I got several years ago and do some speed tests and see what kind of weight capacity it has.
Posted by Mike Shimniok