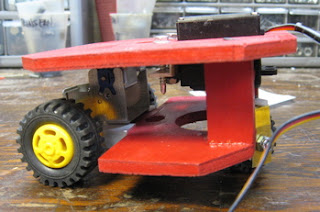 Check it out! I made a lot of progress on the firefighting robot prototype over the last few days between work and babysitting our nephew. The chassis is done!

Here's a quick howto. The goal for the prototype was to build it super cheap so the robot is made almost entirely out of stuff I scrounged around the house.

Admittedly, I partially made it up as I went, so it is a bit... rough. (And it is my first from-scratch robot, after all)

A few years ago my best friend and I each bought one of these Tamiya buggy kits to build into robots. I decided to go with a front two wheel drive, rear single wheel steer figuring this would be simplest to put together. Conscripting OmniGraffle for drafting duties, I put together templates for the top and bottom decks and transferred the design to 1/4" furniture grade plywood. Three times. It took awhile to get it figured out, what can I say? Here's the templates: 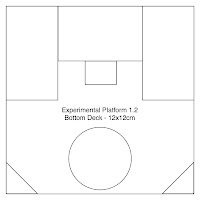 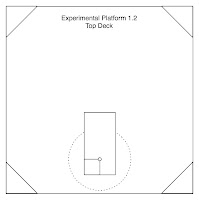 About the rear steer. A strip of brass makes up a U-shaped bracket that mounts the wheel and attaches to the servo horn. The servo is a cheap analog HiTec unit I had on hand. The axle is a 6-32 threaded rod with washers between the bracket sides and wheel, and nylock nuts keeping it in place. I had to buy this hardware for the whopping price of $1.50. The servo rear bracket attaches to a piece of aluminum channel stock via self-tapping sheet metal screw and the channel attaches to the upper deck with the same screws.

The caster bracket could stand some refinement in execution, but it seems to work well enough for now. The downside of the rear steer setup is that the robot can't spin in place, an advantage in navigating maze situations, I would guess. Also, the dual motor front drive doesn't have a differential so that increases turning radius, but also traction (knowledge I gained from four-wheeling).

Plywood is a bit fragile in some circumstances, and mounting this particular geartrain required reinforcement in the form of aluminum channel stock along the edges. You can kind of see these in the photo.

The rear cutout is for the caster steer wheel, the hole behind the motor is... an unrealized idea, shall we say. 1" square by 1.5" long blocks are the supports for the upper deck. They're glued and screwed to the lower deck.

Turns out the little bugger is a lot quicker than I expected. Looks like a fast robot is within reach after all. Without having to get gargantuan motors and without spending a fortune. I'll do some timed runs tomorrow.
Posted by Mike Shimniok