With less than two months left to get Data Bus working, why am I working on Ground Control Station (aka GCS) software?

One reason, honestly, was to have something fun to show at Denver Mini Maker Faire. Another reason is that I'm convinced it'll help me save time troubleshooting. I'm also going to need it for the SHARC AVC entry.

I had already written the GCS software in Java Swing, complete with Google Maps. What wasn't working was telemetry. Also, it was written for ancient Java 6. I updated to less ancient Java 7, a newer IDE, and more.

The gauges (GaugePanel) are implemented as JLayeredPane objects and each gauge needle is a JPanel added to the gauge (GaugeNeedle). The needles listen for changes to associated Property objects (like voltage, current, heading) that are set when reading data from the telemetry stream.

These Property objects implement an Observable interface which means that whenever a new value is set the object invokes a callback on a ChangeListener. The GaugeNeedle implements ChangeListener and the callback changed() method.

So what happens is the TelemetryParser reads, say, a voltage from the robot, sets the voltage Property, which then calls voltageNeedle.changed() and the needle updates its position.

Probably the hardest part of all of this was getting RXTX to work. I am going to abandon it in favor of other options at the earliest possible opportunity because it's always such a nightmare to get working and things are much worse now with 64-bit machines, 64- and 32-bit JVMs, the new Mac OS X version that appears not to be supported, and more.

Anyway, for better or worse I have a SerialPanel object that handles UI aspects of connecting to a serial port and receiving data, and then calling a callback (a Parser) to do something with the data. The TelemetryParser is responsible for splitting the CSV and setting the associated Property objects.

Now that I'm on Linux, I can't use the Google Earth Plugin; it's not supported. One of the key features I need is the ability to quickly visualize the robot's pose estimate and bearing/distance to waypoint. So I'll have to get something working soon.

For the moment I have a stupid simple telemetry stream set up. It just spits out a header character, a CSV of the telemetry data, and a newline termination. I was scrambling to get this all done before Maker Faire, so there's more to do, like error detection and correction.

The robot logs a lot of data as it runs. I'd like to implement log file download within the GCS. Presently, my Java serterm serial terminal program serves this purpose. I'd like to run it all in the same software, however. 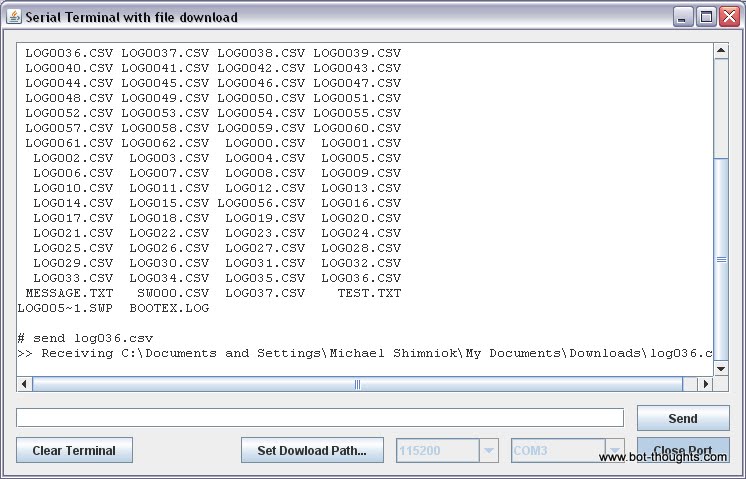 Also, it'd be handy to be able to record telemetry data for immediate playback without having to wait for (giant) log file download over serial. So that's also part of my plans.

It'd be nice not to have to remove the bot's cover and plug in a USB cable to check data after each run. That burns up precious time of which I have little.

I figure it'll also be helpful to watch robot telemetry as it runs. So I picked up a pair of Xbee Pro S1 radios to play with. The 60mW power claims a mile range. I need a couple hundred yards, tops.

So far so good but I'll need to do some range testing and make sure there are no issues with the RC receiver and Xbee antennas sitting in close proximity. I realize lots of stuff shares the 2.4GHz band relatively successfully. Exactly how I don't quite know. Like I always say, "it should work"...
Posted by Mike Shimniok