At long last, I've finally finished my Oscilloscope Calibrator, based on a design for the Heathkit IG-4505 and it's made with a number of parts from my neighborhood Radio Shack. And more than a few not from Radio Shack, but who's counting?

On the front panel, you see a power switch on the left, a frequency selector knob on the right with 6 LED indicators for frequencies of 10e1 through 10e6, a switch on the left multiplies the frequency by 1 or 2 indicated with two more LEDs, a BNC and two banana jacks for output.

To revisit the design briefly, it's all TTL. Gloriously space-wasting, electricity-burning, old-school TTL. A typical microcontroller could do everything this stack of TTL ICs does, in a fraction of the size, cost, and power usage and with many more features. Boring!

TTL is way more fun. The circuit is a bunch of cascaded counters acting as frequency dividers. The input is a 4MHz crystal feeding into a /2 and /4 divider to give 1MHz or 2MHz as the base frequency. That feeds into six /10 counters.

The output of the various counter stages are wired to a Radio Shack 6 position, 2 pole rotary switch. The switch selects which pulsetrain to send to the output jacks. It also select which front panel LED to light. It's topped with a knob from "The Shack" too.

The BNC jack is one of several I ordered from an overseas seller on eBay and the banana jacks are from the second TGIMBOEJ to cross my path (but, RS carries some too).

The power switch is another Radio Shack part and I think the fuse holder is, too. If it isn't, it could have been.

The power cable is salvaged from some piece of old audio gear I picked up in a thrift store (once again, you can probably find the necessary parts at... you know)

What's inside?  In the upper right is the power supply. My very first home-made PCB (I've come so far since then...sniff, sniff, ...) using ferric chloride and copper clad board from RS. 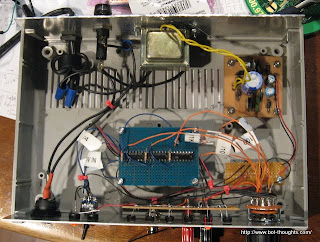 Upper middle is, as you guessed, a transformer for the power supply. It's from Radio Shack. In the lower right is a power distribution board, nothing more than a cut down Radio Shack prototyping PCB.

Bottom middle is a stack of blue prototyping circuit boards holding the frequency generator, a cascade of TTL IC counters, a 74LS393s and a handful of 74LS160s plus a 4MHz ceramic resonator and a 74HC04. I don't remember where I sourced these. Maybe Jameco or All Electronics or something. The prototyping boards come from dipmicro.com and they are great. I'll be posting more about those at another time. But they also could've come from the big red R.

LEDs were purchased several years ago. I don't remember where but I could have easily gotten red ones from... do I have to say it?  (Of course it would've cost me a fortune but anyway)  Standoff hardware for the PCBs comes from several sources: Radio Shack (#4 hardware), All Electronics (#4 spacers), a few eBay sellers (M3 standoffs), and smallparts.com (M3 nuts, machine screws).

The enclosure is salvaged from a broken function generator I bought a few years ago. I used plain old aluminum sheet (K&S Metals stand at the local hardware store) for the front and rear panels.

I decided to omit the amplitude feature from the original IG-4505. I may go back and add that later. There's plenty of room in the case for another circuit board. I may be able to stuff another switch selector somewhere on the front panel. We'll see. 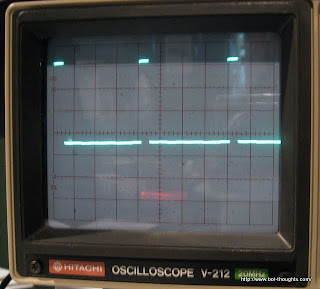 So anyway, it's done and now I know that my Hitachi V212 is pretty close at most scale settings, whereas the Hitachi V1050F isn't. I will have to calibrate it one of these days.