AVC: Is a Compass Necessary?

While building my 2012 AVC entry, basic questions keep coming up. What sensors are really needed to reliably run around the course?

Do we really need a compass?

A very sharp fellow I know, Jesse, asked me this recently. I had no answer.

Looking at 2011 top finishers, 3rd place Team XYZZY used an ArduPilot board to create a tilt-compensated compass, adding GPS, and a wheel encoder.

Team Tobor placed 1st for the second year in a row using fairly sophisticated mathematics to fuse data from a 1-axis gyro, 2-axis compass (effectively), encoders, and a GPS.

What if we just use a gyro, let's say an Analog Devices ADXRS610 like the one used by Team Tobor. How much error are we talking about? Let's find out using simple math and GNU Octave (free matlab-ish tool)...

MEMS gyros suffer from drift which can be minimized, per the datasheet, to 200°/hour using their 3-point calibration technique. That works out to 0.0556°/second. The course is about 270m long and at last year's speeds of about 5m/s, it takes approximately 60 seconds to complete.

I wrote a simple Octave script (download: gyrodrift.m) to answer the question, assuming a constant speed and a straight track for simplicity. Define the time step dt to be 0.100 seconds, and define the distance delta to be velocity times dt

Now define positions, x, along the course (I'm assuming a straight course for simplicity) with a step of dx meters. Then define time values given the position values.

Now we can figure out the cumulative gyro error in degrees at each time step:

From which we can, at long last, compute the cumulative position error over the course through numerical integration:

Wrap all that in a function, and plot the results. For a speed of 5m/s, we get a total position error of  just over 7m by the race's end.

But, if you want to win the AVC in 2012 you sure as heck better be going faster than 5m/s. Let's say the speed-doubling trend continues and you run 10m/s. By the end, position error is 3.6m. 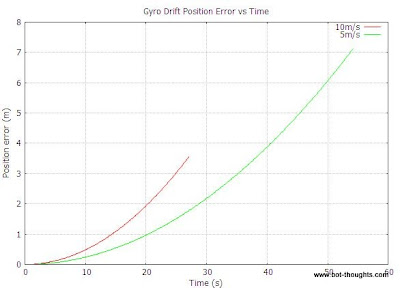 So is a position error of 3 meters too much?  Ultimately, each AVC entrant has to decide for himself or herself. Among the things to consider:

Some time ago, I made a design decision without really running the numbers. It's much better to analyze first, then decide.

What would you choose?