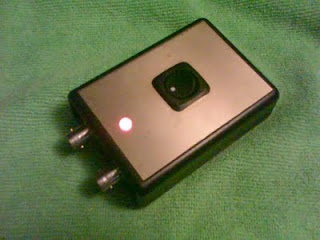 My first prototype of the mini function generator is now officially done. It's a tight fit inside that Hammond 1593 project box from All Electronics, but it works.

I like this box a lot and will probably order several more. It has a removable front panel, a sliding battery door to fit AAs or 9V batteries, and is sizeable enough to fit my various Radio Shack prototype PCBs.

The BNC connectors come from one of the accursed Global Specialties 2002 function generators that I have been trying to get working. I gave up on that one and decided to part it out.

My first attempt to install a slide switch on the top failed miserably. I cannot cut square, straight, correctly sized holes without better equipment and more patience. Everything was wrong with this attempt (the picture doesn't even begin to convey how bad it turned out). To cover the mess I made, I used a larger power switch that covers up the original holes. Then I figured why not dress the thing up with a brass insert. 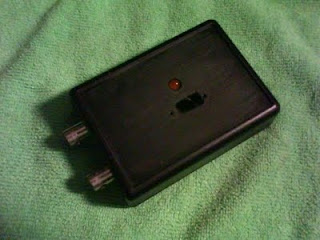 Clearance for the switch and the BNC connectors is pretty tight and I had to saw out some unused parts of the PCB to get it to fit. The PCB is mounted with plastic standoffs from Radio Shack. The plastic standoffs are glued to the case with Sure Hold Plastic Surgery. Note that this isn't my idea, but rather came from this Sparkfun Tutorial. 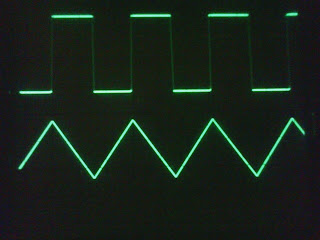 I swapped out the LM258N Op Amp for an LM1458CN which apparently has a faster slew rate as the trace is substantially cleaner than the one generated by the 258. No spikes, no ringing, etc.

So despite some challenges met with kludges, I'm fairly happy with the results. I haven't actually built anything in an enclosure in 15 years or more. And, sadly, while I'm no better at it now, at least I stuck my toe back in the water and I can jump in when it comes time to build an oscilloscope calibrator. But more on that another time.