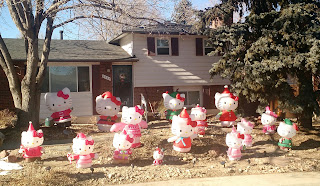 What We're Dealing With

There's a single, white, surface mount LED inside the small kitties at the back of the head, clipped to the material from the outside (see right)

These inflatables have zippers at the bottom to access the internals. There's no need to unclip the LED.

The medium sided kitties have two LEDs. So, maximum of probably 20mA per LED.


How much voltage and current do the small power supplies provide? Voltage, verified by my multimeter, is 12V. Current available is 1A.

We settled on two sets of four series-connected LEDs and a series 82 ohm resistor. So, four LEDs in parallel with four LEDs.

I found some great protoboards on ebay. Long and narrow, it was easy to install the LEDs and resistors. 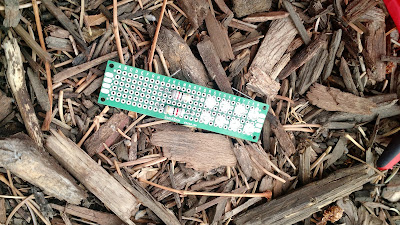 Since my wife has mastered soldering while teaching the 5th graders, assembly was a team effort.

Installing the LED array was a matter of unzipping the un-inflated Kitty, reaching up in and grabbing the LED module, pulling out to access it. 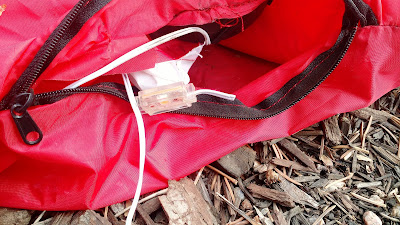 Then, clipping the wires, I soldered them onto the protoboard. 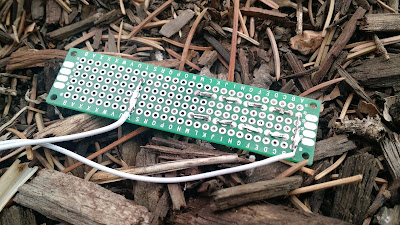 I placed a dollop of Goop to glue the new board onto the old module. 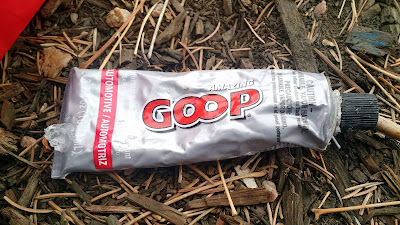 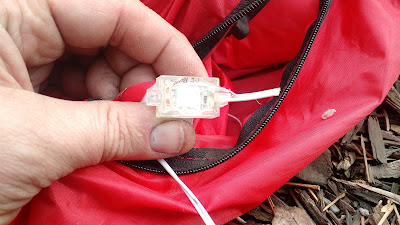 Then added a zip tie (pink of course), belt-and-suspenders style, and we have bright kitties again!

These white LEDs have a forward voltage drop of about 2.8V and a maximum current of 20mA. By reducing current through the LEDs with a resistor, and by placing the LEDs in series, the current demands on the power supply are minimized while extending LED life -- at the cost of a slight reduction in brightness.

Kirchoff's Voltage Law states that in a circuit, when you traverse a single path starting and ending at a given node, the net sum of voltages is 0. You have 12V supply, so the load drops 12V. 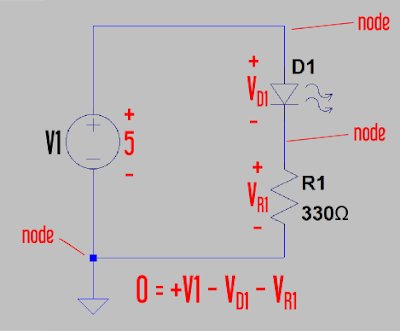 If you place four LEDs in series, the sum of voltage drops is around 12V. What about current through each?

Well, Kirchoff's Current Law states that the sum of currents entering and leaving any node in a circuit is 0. That means the current through each LED and resistor connected in series is the same.

It also means that connecting four LEDs in parallel draws four times the current as four in series. That's why I put the LEDs in series.

Finally, Ohm's Law states that voltage is equal to resistance times current for a resistor (V=IR). 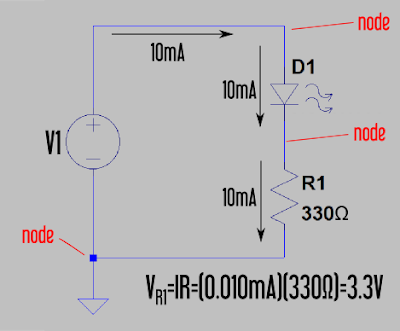 Using all those laws, you can define the current you want through the LEDs and solve for the resistance value you need.

In this case, if I want I=15mA, and each LED drops 2.8V, then using Kirchoff's Voltage law, I can solve for the voltage across the resistor:

Then using Ohm's Law I can solve for the resistance, R, that results in a 0.8V drop and 10mA of current. 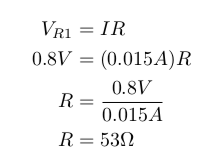 Closest E24 (5% tolerance) resistor is 56 ohms, but it's a good idea to see what happens in the worst case.

If you recalculated R for the worst case voltage and worst case current (20mA), you'd compute R=70. With the next E24 resistor of 75 ohms, you'd have a reasonably safe margin.

You could also check the LED datasheet and see if there is a worst-case (lowest) voltage drop on the LEDs. If you really wanted to get fancy, you could design a current source circuit instead that would be a lot less sensitive to power supply voltage error. But that's another story for another day.
Posted by Mike Shimniok