Micro Center in the DTC is quite the maker oasis with gear from Arduino, Sparkfun, Adafruit, Parallax, Karlsson Robotics, Digispark, Velleman, Raspberry Pi, and more.

In this age of internet shopping, you may not know that browsing through many shelves of geekware in person is very fun. You pass by rows of products, imagination spinning out of control, dreaming of all the miraculously cool things you could do...

And so, I walked out $56 poorer but with a new Raspberry Pi Model A, black case, SD card, and Pi Cobbler.

Those of us in Denver have suffered ever since the demise of TechAmerica up on Colorado which stocked lots of component parts, test equipment, kits, and more. Well, Micro Center is heading in the right direction. 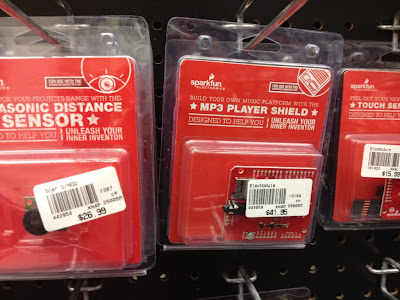 They stocked Sparkfun retail packages for quite awhile.

They were also carrying Arduino products and some clones.  Now they've  massively expanded their DIY section from one wall to two walls plus two islands. I wouldn't be surprised if the trend continued.

It reminds me of how cool it was to look at logic gates and speech synthesizers at Radio Shack.

They also carry a few components parts like LEDs, at somewhat cheaper prices than Radio Shack.