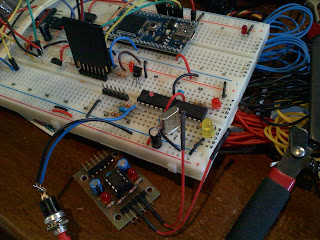 The AVC bot is coming together slowly.  I am farther along than the blog posts would indicate because they lag the actual work by a few weeks.  Even so I've simply not made enough progress.

To give myself a kick in the butt, I've invited some friends over to witness the maiden voyage (and/or catastrophic failure) of the AVC bot on Saturday, February 26.

Crap, I gotta get busy now!

I owe Sparkfun a video of the robot driving forward and turning left on its own but if that's all the robot can do on April 1, I'm screwed.

But, if I have that functionality in two weeks, that gives me several more weeks to refine and build upon it so I'll have a functional robot come April 23, competition day.

The path ahead to the maiden voyage:
Even after I get all that done I'm still only about halfway home.
Posted by Mike Shimniok