Our Tivo, satellite receiver, and DVD player are on a shelf at the front of the living room, partially obscured by a sofa making it difficult to control them with remotes. I could go and buy an infrared (IR) remote extender (aka IR repeater), but what fun is that when I could build one? Plus, I want to use IR signaling for robotic communications so here's a perfect learning opportunity. 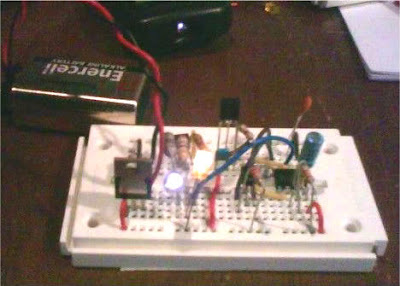 Requirements: The repeater will have to allow for very reliable control of these three devices, it should be aesthetically pleasing or at least unobtrusive, fairly small, and run for months off a pair of AA batteries.  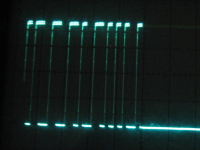 The oscilloscope trace at the right shows the digital signal from the remote. There are multiple coding schemes for remote control like pulse, space, and phase encoding.

To avoid interference with ambient light, IR remote controls modulate the light signal at somewhere in the vicinity of 38kHz. That way the receiver isn't fooled into thinking some random flash of light is coming from the remote.

So we need a way to detect pulsed 38kHz IR light and convert that into logic pulses then repeat the signal as pulses of 38kHz modulated infrared light. Detecting IR remote signals and converting them to logic signals is exactly what IR detection modules are for, like the Vishay TSOP32138. An astable multivibrator and an infrared LED handle the rebroadcast.

After searching the web, I settled on a circuit from this website as a starting point. After some tweaking and experimenting I arrived at this: 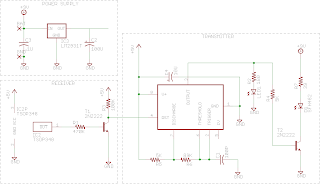 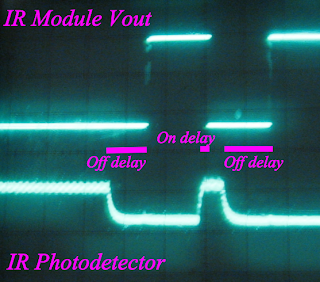