Here's how to interface an ancient, 80's era, General Instruments SP0256-AL2 speech synthesizer chip to a Basic Stamp 2 so you too can give your robot the gift of virtually unintelligible, vintage, synthetic speech! (Listen closely to the audio clip and you can almost make out, "Hello world") 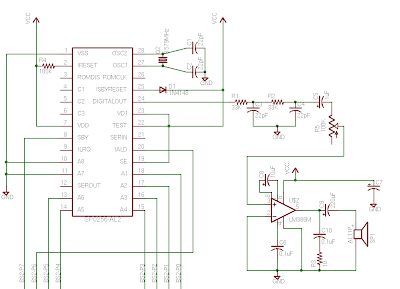 just wouldn't work. It differed slightly from the one presented in the data sheet. The data sheet circuit is pictured above, but with the addition of a giant 100uF power decoupling cap; the LM386 was apparently drawing enough current with the speaker attached to cause the BS2 to reset similarly to prior motor control problems. A somewhat smaller cap doesn't seem to work -- more investigation needed. The potentiometer above is actually not installed yet; a resistor is in place to prevent clipping that was showing up on the o-scope.

' Wait for P7=SBY (standby) to indicate chip is done speaking
notdone:
IF IN7 = 0 THEN notdone
RETURN

Quick Code Explanation:
The data sheet goes into this in detail, but in short: the program puts the 6-bit phoneme data on data lines A1-A6, then pulses ^ALD low for a short time to let the chip know data is ready, then polls SBY until it goes high, then repeats until it runs out of phonemes.

That's it. This is just a prototype so there's lots more to do before this becomes useful. For example, wouldn't it be nice if a handy dandy AVR of some flavor could front end this chip and accept data over serial and/or I2C? Maybe even do true TTS?
Posted by Mike Shimniok