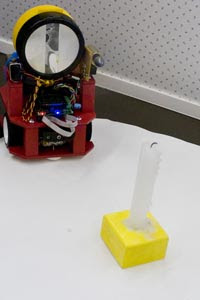 Ended up leaving around 8:40 having just tested scanning for and extinguishing a candle in the living room. Arrived up in Ft. Collins by 10:10, with plenty of time to adjust floor sensors, test the robot in the arena and tweak code.

SHARC and FRR made a great showing with lots of competitors and spectators. The room began filling up with kids to watch the event. While all this was going on, my robot kept misbehaving right at the starting circle, making a left turn into the wall about 75% of the time. I couldn't figure it out.

Then my batteries died. While I swapped them out, the wires to my battery tray broke loose again! I had to jerry rig a solution: strip the wires and manually wrap them around the end terminals. Stressed out, fumbling around, trying to block out the noise and chatter of the crowd, I got that fixed and it held together for the rest of the competition. By now there was a good sized crowd of small spectators and quite a few adults as well.

My first run was a disaster. Even though the candle was in the first room in Pokey's list to visit, the robot careened off to the left again directly into a wall. Others in the competition had problems with navigation at first, too. Pokey went back to the bench for diagnosis. For some reason the IR rangers, which had been dead solid in every condition I'd tested, were giving jittery readings and popping above and below the threshold for detecting the presence of a wall. This tricked Pokey into thinking he was farther along on the course than he actually was. With new threshold values Pokey was ready for the 2nd run.

This time around the odds were seriously stacked against the little red robot. The candle was in one room he'd never made it to before was the one directly adjacent to the start position, the last one on the search path. Though Pokey got to both the first and second rooms, his poor wall following set him off in the wrong direction for room 3.

By this point, George had put out a candle with water, and Anthony did as well! Very awesome to see these robots working so well!

Back on the bench, I did some additional minor code tweaks and put Pokey on the home circle for the third and final trial. The candle was in the 2nd room on his itinerary so there was a good chance for success.

The timer started, Pokey was off. He made it into the first room flawlessly, scanned, then exited and made his turns into the second room, stopping a bit short, then he scanned... but missed the candle and left the room! My last minute coding of the scanning routine just wasn't solid enough yet. So close...

In the end, George took 1st and Anthony 2nd. Congrats to them and to all the competitors. It's not easy building a robot for a competition and everyone who fielded a machine can be proud of that accomplishment.

Heck even those who didn't field a machine but have a start on one ought to feel pretty good. And since SHARC is going to host a firefighting challenge in April we all get another shot at this. (Well, unless it happens on the same weekend as my trip to Moab for four-wheeling).

In the meanwhile, I'll share what I've learned, post up code and circuit diagrams and other fun stuff. Once I get all the video and pictures from folks I'll edit together a video and post that too.

Thanks to everyone who has been reading this saga, your support is much appreciated!
Posted by Mike Shimniok