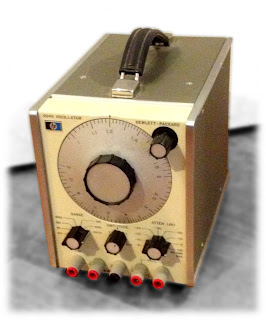 I built a custom power supply for my HP204 oscillator and cleanly modded screwed up, hacked things together, and eventually shoehorned it into the case.

I hacked my HP204D, similar to the HP204C, because the waveform sucked at low frequency settings. Mine was battery operated but the batteries were missing. The power supply circuit was designed to charge those long-gone batteries and, without them, it doesn't supply the correct +13V and -13V voltages.

I originally planned to make use of the original diode bridge rectifier and be all clever. I was going to cleanly replace the original transformer with a new, center-tapped one that I'd been saving for just such an occasion. Pretty much none of this worked out.

The transformer output a rather high voltage requiring large, high cost capacitors that wouldn't fit in the case. I discovered this after I cut holes for the big transformer. Oops. I bought a lower voltage transformer and selected cheaper, smaller, shorter input ripple filtering capacitors.
The new transformer was a bit smaller than the old so the hole I'd already cut into the circuit board was too big. The install wasn't quite as clean as I'd originally intended. It's good enough, though. The transformer is affixed to a single, existing mounting standoff affixed to the PCB by the factory.

As for the original bridge rectifier, I goofed up and blew out one of the diodes, then trying to repair that, I damaged the traces, lifting them off the PCB. It was time to give up on that plan.


After breadboard prototyping, I designed the circuit and layout, etched the board, removed all the original regulator components and tapped into existing +V and -V traces so I didn't have to change the green card edge connector, too.

Then I shoehorned the supply into place on the internal frame out of the way of other components. The transformer is wired from the mains socket through a switch for 120V/220V compatibility. I don't know why I retained that feature since I have no intentions of taking this device overseas. Whatever.

But guess what. The lowest frequency setting still doesn't look right despite much tinkering with the device's calibrations. All the other frequencies are usable. I'm not positive but I think it has to do with the automatic gain control circuit. If I find out I'll let you know, ok?