A message to you from the newly completed RoboTurkey:


RoboTurkey's actual name is Oscar (all Thanksgiving turkeys are named Oscar in our family). At random intervals, he either moves his head around, flaps his wings, or speaks while moving his wings for emphasis. He simultaneously moves his beak while playing back audio clips of my daughter talking.

Here are some specs and info: 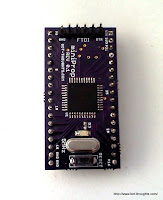 I'll post up build details in the near future.