Continuing to flail, here. I still don't have reliable navigation working and I'm a month away. That sounds like a lot of time but it's a flash in the pan. I'm very nearly screwed.

My recent test runs suggest various possible errors in the navigation sensors. Here's what I've come up with so far based on two test runs last night and some offline analysis of the raw sensor data.

I equipped Data Bus with the iGPS-500 and collected data for both GPS units simultaneously. I thought because the Locosys was getting a fix that it was to be trusted.

But it's been unreliable. Last night the iGPS-500 was the only one of the two modules getting a fix... inside the house!  A multi-satellite fix, at that.  Long story short the iGPS-500 frequently seems to produce better data.

Below, the iGPS is pictured in blue, the Locosys LS20031 in green. It's all over the map. In my other test run,  the iGPS did ok, but went squirrely in the upper right near the big tree. The Locosys looked better in terms of shape but was offset about 50 feet. 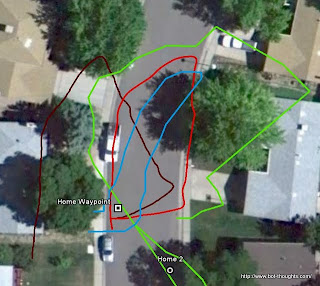 I wanted to see if the compass simply had a bias so I tried correcting and replotting for 20 degrees then 25 degrees.

The pink path below is the original on-board dead reckoning plot. The green is the same plot rotated 20 degrees and the blue, 25 degrees. The red plot is the hand-tuned gyro-based dead reckoning. 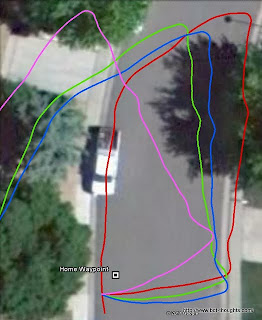 Clearly the issue isn't a simple bias.  The compass heading does not seem to change with the correct proportion during turns.

Part of that may be due to the tilt from the convex surface of the road throwing off the heading. Possibly also because the road itself slopes slightly downhill. I don't really know for sure. I need to...


If the error isn't due to the sloping street, and if I can describe the error in state space form along with the heading and heading rate (gyro), then I 'should' be able to build a Kalman Filter to deal with it.

I had been trusting the compass most. It looked so good on a graph. But I was wrong. Using it to plot dead reckoning shows the real truth. I hadn't really trusted the gyro until now.

Experimenting with different bias values, the gyro provides the best dead reckoning information and in fact the best positioning information. It appears that the biggest contributor of error is the bias (or drift of the bias). Which suggests that if could only find a way to calibrate for the bias, I'd have reliable navigation. 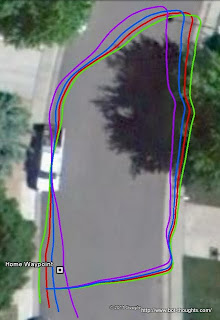 I can't just take an average at standstill because I tried averaging the first several seconds of the data before the robot started moving. The resulting plot was off quite a bit from reality. So... is there a bias that comes into play when in motion, or during turns? Or was it due to temperature effects?

At worst, maybe I can make test runs and hand calibrate bias until the plots look right, and somehow correlate that to temperature. What super sucks is that we're talking about nailing the bias down to the nearest half a millivolt.

All the off-line plots were done by integrating heading and distance measurements every 20ms intervals, an order of magnitude more often than the robot's onboard code. Yet, the difference between the plots is pretty negligible. So integration error doesn't seem to play in. 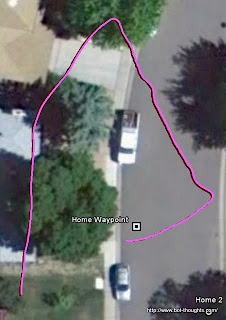 I wonder if there's some distance error due to using straight line interpolation to represent the curved vehicle path. If that error was large, I'd expect to see a bigger discrepancy in plot length visible at the end of the path in the lower left part of the pic above. Instead, the length of the two plots are within 10cm of each other.

Maybe this is inexperience talking but at this point I don't see how Kalman filtering can possibly make use of the massive compass and gps errors to stand any chance of correcting for bias on the gyro and producing reliable heading information. I would expect a Kalman filter would basically tune out the measurements from GPS and compass to the point of ignoring them.


Oh yeah, almost forgot, I still have to dodge barrels.

Now I'm struggling to get a reliable 5V power supply for the robot that can deal with massive voltage sags from the BEC under heavy acceleration.

And as of last night, I'm fighting with that stupid, buggy RC switch board again. It switches off control of the MCU but doesn't switch on transmitter control. Great.

And on top of everything else, my espresso machine has been broken for a week and my efforts to revive it last night were in vain.

But hey, I'm not complaining. Ok, maybe I am.

Meanwhile, you may wonder why I'm bothering to write all this when I should be working on the robot. Believe me I have been working very hard on the 'bot. These posts help me to collect my thoughts. Also, I feel more accountable to get busy when the time permits.
Posted by Mike Shimniok