I'm still taking baby steps towards equipping Pokey's ATmega168-based Orangutan LV168 with a BlueSMiRF bluetooth modem. By the end of this article the foundation will be laid for telemetry/data collection for troubleshooting.  Not to mention command/control and image capture which I have planned after the firefighting competition is done.


Step 6: ATMega168 MCU Serial Communication
Having achieved success with the Basic STAMP, it was time to switch over to the final platform, Pokey's Orangutan LV168 board with an ATmega168 microcontroller.  The older orangutan-lib library from Pololu includes some routines for serial communications over the 168's PD0 and PD1 pins. (Incidentally, Pololu now provides the Pololu AVR C/C++ Library).  Thanks to the LEDs on the level shifter, I was quickly able to diagnose an issue and establish communications between the PC and the Orangutan. First I got the 'tan to send data to the PC. 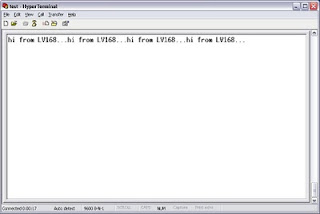 The Orangutan LV168 says hello
Then I set up character-based echo with the following C program (some details are omitted here):
#include "util.h"
#include
#include "uart.h"
#include

} //while
Step 6: ATMega168 MCU BlueSMiRF Communication
It was now time to leap forward to establish communication between the Mac application and the Orangutan LV168 over bluetooth.  One thing I haven't mentioned is that one has to get the TX and RX lines right and that this can be tricky depending on what type of components you're dealing with.

Some devices, like PCs and MCUs transmit on their TX line and receive on their RX line as you'd expect. Other equipment like modems, label their lines with respect to the computer talking to them. They receive data from a PC on the PC's TX line and send data back to the PC on its RX line.

You've heard of a null modem cable?  That's what it does, swaps the TX and RX lines (among other things) 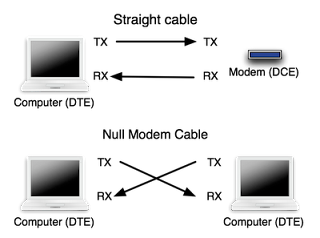 The BlueSMiRF acts as a DCE and the AVR MCU acts as a DTE. So you just use a straight cable. (I later found out that my Sparkfun FTDI breakout board also acts like a DTE).

At any rate, I implemented code on the MCU to send the +++ and AT+BTSRV=1 commands prior to performing the line-by-line echo (note that I'm not verifying the receipt of the "OK" message sent by the modem; I'll do that later).

// AT+BTSRV=1
strcpy((char *) buf, "AT+BTSRV=1\r\n");
uartSendBuffer(buf, strlen((char *) buf), &flag);
delay_ms(2000);
I connected the BlueSMiRF to the MCU fired everything up and was able to connect. The Mac application successfully sent data and displayed the echo sent back by the MCU.  Right on!  With the baby steps finally done, next up is controlling the robot from the Mac. 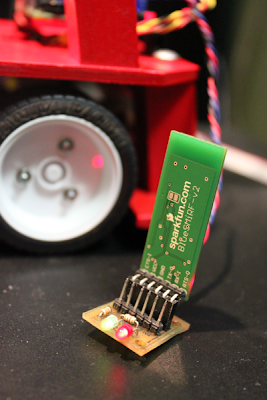 Pokey's DIY Serial PCB
I since put together a simple breakout board for serial communications with the LV168.  The board accepts either the BlueSMiRF modem, or my Sparkfun FTDI 5V breakout board so I can go wired or wireless.

I tossed a couple of LEDs on the board to indicate data transmit and receive.  Although my DIY "silkscreen" layer was severely cockeyed and though I goofed up the schematic and had to hack the board, I'm pretty happy with the results. This is my smallest PCB to date at only 1.00" x 0.75" ! :)