I've been playing with Schmitt trigger circuits again, this time using a 555 Timer based on a discussion on diyrovers started by Jason.

Schmitt triggers are circuits that provide hysteresis. The concept is simply that instead of one threshold for on and off, there's an upper and lower threshold.

On my robot, using QRE1113 reflectance sensors running at 5V, this is the waveform I get. 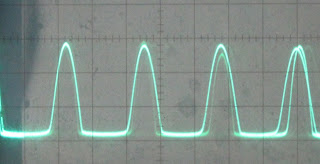 It looks similar to a half-rectified AC signal, about 3V peak and around 1.5V offset. Running on 3.3V, I get a 1.8V peak with 0.9V offset. Either one should be enough to trigger logic circuits.

It's not a bad idea to add hysteresis, though. If the sensor is right between encoder stripes, add a little noise and it could trigger more than intended.

While you can easily find many examples of 555 timers wired to provide hysteresis triggering, and we'll look at the two common ones, a third circuit works better for the wheel encoder system on Data Bus.

In all cases, the encoder signal is ultimately wired to the Threshold and Trigger pins of the 555. 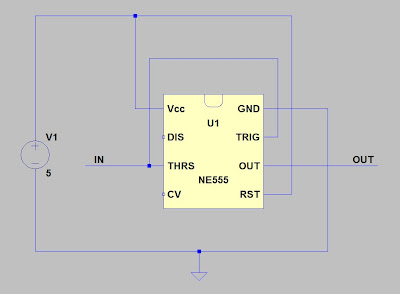 By passing the signal through a capacitor, low frequencies (including DC) are filtered. If this high-pass signal is fed in between a voltage divider, it adds a dc offsets to the signal. 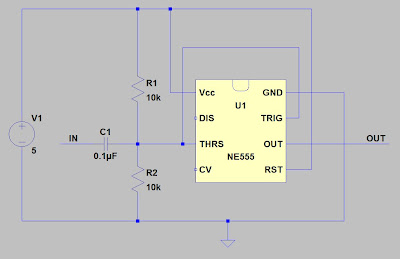 So we're done. Let's build the board and move on, right? Wrong. I prototyped the circuit on a breadboard and found out it doesn't work like I want. At low wheel speeds, the 555 doesn't trigger at all. Why?

In the picture above, the red trace is the signal coming out of the high pass capacitor. Because the wheel speed is so low, most of the signal is low frequency and thus filtered and thus too small to trigger.

So, all you have to do is slap a big capacitor in place of the small one, right? With a capacitor that's large it can trigger on low wheel speeds, yes. However, it can can also get the 555 output "stuck."

Stuck? Yeah. If the robot sits with the input low too long, the 555 won't trigger for a long time after the wheels start spinning.

The reason is that, with the input voltage low, DC offset increases (the series capacitor charges) until the low voltage is now the new DC offset. When the wheels start moving again, it takes a long time for the circuit to bleed off the DC offset. This is the simulated result with a large capacitor, 220uF. It mirrors the real life experiments I did.

A smaller capacitor reduces the effect. Here's a 47uF capacitor. This also shows the output of the 555. The simulations do a good job of approximating what I'm seeing in real life.

Bottom line: you have to find the right capacitor for your needs. A small cap would work on Data Bus. It goes fast, and is only stopped at the starting and finish line. Still, I don't really like this circuit for wheel encoders. I'd prefer to fix the problem with the first circuit.

Using an NPN transistor to amplify (and invert) the phototransistor signal works well. It's not revolutionary although I didn't notice any similar circuits when searching for 555 Schmitt Trigger circuits. So, here it is. 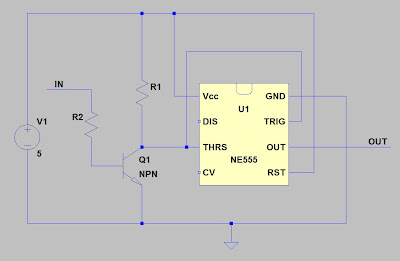 The Q1 transistor is either nearly 5V thanks to the pullup, or nearly 0V when base current is permitted to flow by the QRE1113 breakout board.

As a result, the circuit triggers at the lowest practical wheel speeds and doesn't lock up. Seems reliable enough to use. The only downside is that the duty cycle isn't even close to 50%, although no circuit is going to get it perfect. One can address this issue in software. 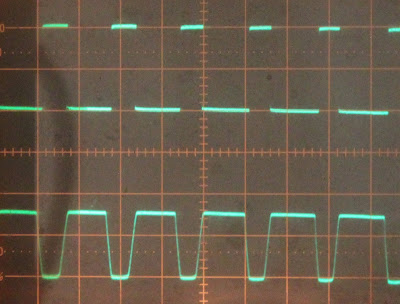 With a pulse train that isn't a 50% duty cycle, calculating speed and distance is probably best done by timing either rising edges or falling edges, but not both.

The longer the robot travels on a particular leg of its journey, the less jitter affects distance calculation.

For speed, it may be wise to adjust control loop timing, encoder resolution, or robot speed ranges to adequately filter jitter and other noise. A slow robot needs more stripes, a fast robot needs fewer. A slower processor needs fewer and/or slower.

Think about how often the MCU has to sample encoder counts to adequately filter noise and calculate speed with acceptable accuracy, given the number of stripes and the robot's typical speed range.

And maybe filtering isn't even necessary. If a speed PID controller is adjusting a robot's speed at every edge, jittery speed adjustments between edges may be effectively filtered by the momentum of a fast, heavy robot.

If the robot is slow and very light, momentum won't filter jittery speed changes very well. Software can do it instead. Change speed based on a running average, leaky integrator, or other software filter. Or, the PID controller can check speed by timing many pulses instead of few.

Wheel imperfections and encoder disc mounting imperfections cause a low frequency modulation of the encoder signal. Sent through a Schmitt trigger, the output pulse width will vary.

That sort of jitter may be a problem when precisely traveling short distances at slow speeds. More precision in the assembly may help. Or increasing the encoder resolution.

The 555 is quite the Swiss Army Knife of ICs. Acting as a Schmitt trigger is one of its many capabilities. With all that said, it's probably just as easy to just use a Schmitt Trigger inverter instead of the 555. I'm looking into that next.