When I say "for rovers" it means it looks like a proper dashboard. Absent are pictures of planes on gauges, artificial horizons, and altitude indicators. The little vehicle model in Google Earth isn't a Bixler or Quadcopter, it's a Data Bus. :)

The GCS is pretty rough around the edges, just an early alpha, but should offer some visual entertainment for those that stop by my table at the Thompson Robotics Expo later in October.

In the clip below, the application is playing back log data recorded during my 3rd AVC run in June.


The GCS displays speed, current, battery voltage, and heading. It'll soon display bearing to waypoint, show the waypoints on the Google Earth view, and so forth.

I may build it out with more functionality for Data Bus depending on time available before the next AVC.
Posted by Mike Shimniok 2 comments:

A few of us interested in autonomous rovers and the Sparkfun AVC have set up a discussion group on Google Groups. I invite you to join!

I'd love to discuss machine vision for path following and obstacle avoidance, management of vehicle dynamics, improving precision of pose estimation, and things like that.

Last year while working on Data Bus for the AVC I exchanged email with several people and I attribute my success partly to these conversations.

Instead of losing competitive advantage by sharing my designs, everyone took their own unique approach, yet we all benefited from troubleshooting help, learning from others' experiments, and motivating each other.

The group isn't just about AVC rovers. Hopefully we can form a brain trust for rovers of all types and push the envelope a little.

Lots of fun and interesting problems are left to be solved! 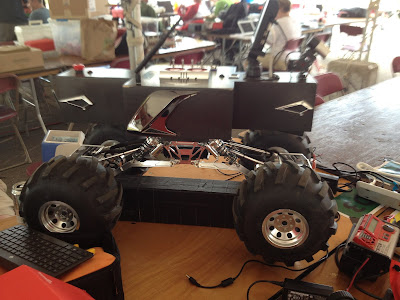 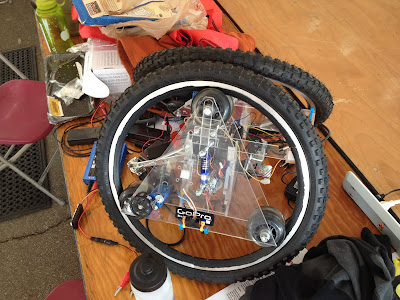 On a whim I picked up a 30W soldering iron from a 99-cent store in Tucson.

I always say you can use a cheap iron to make nice solder joints as long as you have flux. Time to prove it.

Immediately obvious was the iron's ridiculously short power cord, about 2 feet in length. Soon, thereafter, the power plug revealed its inferiority. It was loose within the outlet because the plugs are thin by 0.020".

After warming up the iron and letting it smoke for awhile (what it was burning off I'd rather not know), I broke out some Radio Shack rosin core solder that's probably long expired. The stuff works moderately well with my Weller WES51 without flux paste or a flux pen.

Soldering on the pin headers actually went fairly well. The iron has a nice pointy tip for detail work. Heat took a little longer to transfer and solder flowed slowly but, it flowed. I'm sure this iron runs cooler than the 650-750° I set the WES51. The result? Relatively shiny solder joints. What do you think?

How about SMD soldering? 0.5mm pitch anyone? I had a spare LPC210x breakout board and an LPC2101 MCU laying around, so why not?

I used a Kester #2331-XZ flux pen and Radio Shack 0.015" silver bearing solder which I like a lot for detail work.

The iron acts differently than the WES51 on fine pitch SMD parts. I was able to sweep solder across the pins but had to go back and use a solder braid to remove solder.

Towards the end I could feed just enough solder to do a few pins at a time. Not bad. The soldering results were reasonable for a first try, don't you think?

I think if one were to buy one of these, replace the awful cord, and practice a bit, it would suffice as a first iron. Surely as good as the typical, cheap 40W iron. Brass wool seems to clean the tip reasonably well; keeping the tip clean makes a big difference. I use an Aoyue brass wool tip cleaner.

In my first forays into detail work, I used a Weller WM120 12W pencil iron which, at the $40 price point, is enormously better than the vintage 80's 40W Radio Shack iron I had been using.

The Weller is somewhat better than this cheap iron with a finer tip for more control, and better solder flow, though at lower wattage it takes a long time to heat up. Best for use on surface mount components.
Posted by Mike Shimniok No comments: